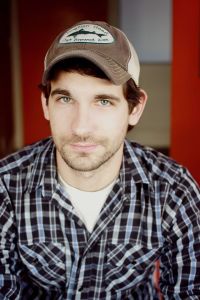 VAH: Today the third and final installment with Sam Slaughter as we talk about the writing life. Sam – are you a full-time writer?

SS: I am indeed a full-time writer, though what I write tends to range widely. I get paid to be a copywriter for a health and wellness company here in Central Florida. That is my Monday through Friday job and as far as writing jobs go, I enjoy it. It is the first (paying) writing job that I’ve held that allows me to work creatively and collaboratively and since so much of my other writing is done by myself, I revel in the atmosphere around me.  In addition to that, I try and write something else (creative work of some sort, or book reviews) every morning before work. I’ve found that trying to do so after spending all day in front of a computer never works so I gave up trying.

VAH: So how do you get going the page/screen is blank?

SS: Stubbornness, sometimes. A glass of bourbon other times. I read somewhere that Russell Banks suggests that three drinks is the perfect amount to drink while writing, if you are into that. Now that I write mostly in the morning, I don’t drink, but I have found it to be beneficial previously.  Running also helps me because it isolates me and the voices in my head, allowing me to focus on something that I could write.

VAH: “Voices in your head,” such a good way to describe an author’s head space! What is your process when working on a new piece of writing?

SS: I hear it or see it or whatever it in my head long before I put anything on paper. Usually it starts with an image or a line and I build it out from there using the typical journalistic questions of who when and most importantly why. As a writer I’m always observing (I think there’s a certain point when you can’t not people watch whenever you’re in public) and plenty of times I’m left going what the hell or why would he do that. Those are the moments I build off because I’d much rather make up a person’s life story using what I can see than hear what actually happened, truth stranger than fiction be damned.

VAH: Getting your work out there – do you have a submission system or plan?

SS: I take what was referred to somewhere as a Hydra approach. I’ll send out a story (usually I’m sending out two or three or however many are ready at the time) to three places. When I get a rejection, I’ll then send it out to two more places, like a hydra getting its head chopped off. I don’t know if this is effective or not, but it makes me feel like I’m being somewhat productive.

VAH: What does your typical writing day include?

SS: When I wake up and drag myself about of bed, I make some coffee and boot up my computer.  I’ll either start a new piece or pull up an old piece to edit.  By around 7:30 I get ready for work. At work, I work on various projects—whatever is needed. During lunch or if I have a free moment, I try and use those to read or write down some notes or sentences on whatever I’m working on.  Night time I usually reserve for reading and just letting my mind wander around whatever it needs to in order to be able to write the next day.

SS: Last year I finished my first novel, DOGS.  I am currently shopping it while I work on a variety of other projects, including a second novel. The working title of the novel is Alternate Frequencies and will be an exploration of communication and love, of the desperation born out of not being able to talk to your own child even when he is in the very same room, and the lengths to which a parent will go to show his love. When he is only two, Markus Van Dennen is involved in a serious car accident, landing him in a six-month coma. His father, Chuck, escapes with minor wounds.  Throughout his time in the hospital, Markus’s grandmother sits by his side listening to old time radio shows. When he finally does wake up, life is different for Markus. Whenever he is around people, he sees them talking, but he doesn’t hear what they’re saying. Instead, life plays out like a radio show for him. Some days are dramatic, some unfold like a detective’s mystery, some are just plain funny.  His family, already strained from the previous six months not knowing whether or not Markus would live, are knocked off balance when they realize Markus doesn’t really hear them. Chuck and his wife, Darcy, are at odds over what to do about Markus while their older daughter Jane tries to keep the family together no matter what. Daily, Chuck and Darcy fight over what to do. Both want Markus cured, but amidst their fighting not once do they think Markus might be happy how he is. Jane is forced to watch as Darcy offers an ultimatum, threatening to walk out of the family if Chuck does not agree with her plan. Chuck, forced to show where his devotion lies, must make a decision that will effect the rest of his and his family’s lives.

VAH: Thank you Sam, for taking some time with Three by Five and sharing about your writing life.

Sam Slaughter was born and raised in New Jersey and currently lives in Central Florida.  He was educated at Elon University and Stetson University. He has fiction and nonfiction published or upcoming in a variety of places, including McSweeney’s Internet Tendency, Midwestern Gothic, The Circus Book, The Review Review, and Heavy Feather Review.  He is the Book Review Editor for The Atticus Review and a Contributing Editor at Entropy. He was recently awarded the 2014 There Will Be Words Prize and his first chapbook, When You Cross That Line, will be published in 2015.

1) An excerpt from DOGS, published at Revolution John

2) Part 1 of the story “Fame in the Graveyard,” published at The Circus Book