The 2015 Victoria A. Hudson Emerging Writer Prize winner is:

“ You always stop writing eventually,” my inner voice said. “Wouldn’t you rather make cheese…I’m going to make some coffee now. It’s very early, and I’ve got lots to say before I leave for work.”

Kristen Falso-Capaldi is a writer, musician and public high school teacher. The latter position has led her to believe she could run a small country if given the opportunity. She is the singer and lyricist for a folk/acoustic duo Kristen & J, she has finished a novel and has co-written a screenplay, Teachers: The Movie, which was an official selection for the 2014 Houston Comedy Film Festival. Kristen’s short story, “Of Man and Mouse” was published in the December 2013 issue of Underground Voices magazine, and several of her micro-fiction pieces have received accolades in various contests. Kristen lives in a small town in northern Rhode Island with her husband and cat.

Kristen will receive a scholarship for her registration to attend the 2015 San Francisco Writers Conference, February 12-15. She will also receive a signed copy of No Red Pen: Writers, Writing Groups and Critique as well as the E-book version. Her winning entry will post here in February.

This year there were 37 entries for consideration. There were more semi-finalists than ever before and competition for the final four was quite strong. Each of their entries are expected to post here over the next few months.

Competition for 2016 opens on September 1st.

I Write Because I am a Coward

Victoria A. Hudson Emerging Writer Prize Semi-finalist Augustine Wetta’s response to the prompt – Why I write…

I Write Because I Am a Coward

Twenty-­‐four years ago, when I was working as a lifeguard in Galveston, Texas, I had to pull a corpse out of the water. The body had been drifting alongshore among the crabs and sharks
for three days. When I arrived on the scene, there was a crowd gathered at the water’s edge, jittery and hushed and expectant; and I remember that I was very frightened because no one knew exactly where the body was. That meant I’d have to swim out there and just keep swimming in circles until I bumped into it. I remember calling into my radio for backup, but knowing that help would be a long time coming because Tower 53 was seventeen miles from Headquarters. And I remember how warm the water was that day, and how every tendril of seaweed that brushed against my skin made me gasp and grit my teeth.

But most of vividly of all—and this is the part that still gives me nightmares—I remember realizing that at any moment, I might just…come unglued. There was a real chance that, in front of all those people, I’d throw my buoy in the sand and run away. That was a real possibility. And I remember saying to myself as I pushed deeper into the water that if I could just set one foot in front of the other, eventually it would all be over.

I am a monk now. I have lived as a Benedictine monk for seventeen years, and I think the reason I write is the same as the reason I pray. Frightening and lonely as it can be, I find that more often than not, one foot follows the other. And I take
consolation in this act of writing, because on that day in 1990, when I stepped into the surf to retrieve the body of an unidentified thirty-­‐year-­‐old Caucasian male, I never found him. Deliberately. I shuffled around in the shallows where I knew I’d never find him—and I stayed there until my supervisors showed up. Then they swam out and retrieved the corpse while I pretended to help.

So you see, I’ve thrown my lot in with the cowards. And although I don’t imagine that I’m much worse of a sinner than anyone else, the fact remains that I’ve stood in the shallows while someone else swam deep and did my job. And I’ve done this more than once. My soul is littered with corpses: unspoken apologies, unwritten letters, unpunished wrongs and unanswered prayers.

Twenty years later, alone in my cell, looking out over the cloister garden, I sometimes think of these failures, and of that day at the 53rd Street Beach, and I am ashamed. But then I begin to write. I put one foot in front of the other. And out of the depths, the corpses begin to surface. I drag them to shore and I give them names.

This year was the 7th Victoria A. Hudson Emerging Writer Prize. This program started in 2008 as a scholarship for Master of Fine Arts students and was broadened to any emerging writer in 2011. Originally, one writer from each genre of poetry, fiction and nonfiction was selected. In 2012, the scholarship transitioned to recognizing one writer, regardless of genre. In 2013, the competition became completely electronic with all submissions via submittable. Also in 2013, the competition was listed on Duotrope as a means to widen the availability of information about the Victoria A. Hudson Emerging Writer Prize. The average number of entries over the past few years has been approximately 30 each year. This makes the odds of winning very good.

I’ve personally funded the scholarship every year, committed to a no fee competition. My commitment to that remains, however, I’m reaching out to the indie publishing and writing community at large to help fund this scholarship. My goal is to raise enough funds to support the emerging writer prize over the next ten years. I pledge that no more than 12% will go to the administrative costs for the scholarship. These include costs associated with the electronic submission process, competition promotional advertisements, recognition items for the winners, etc..

Help me keep the Emerging Writer Prize going strong. Over the course of this year, I’ll check back in on some of the previous winners to find out how they’re doing and what they are writing now. Stay tuned.

Please visit the Emerging Writer Go Fund Me site, your contribution is appreciated and please, share this site throughout your social media networks. Thank you very much.

The Victoria A. Hudson Emerging Writer Prize goes to Liz Hansen. She submitted an original presentation to the writing prompt Why I write with a poem rather

than the standard essay format. This was a risky move on her part but taking risk is part of becoming an excellent writer. The two other finalists also submitted original presentations creating a three-way tie. When a tie develops, the writing samples are then evaluated and Liz’s narrative nonfiction piece Passing the Grid moved her entry into first place. Liz’s response upon notification? ” I can’t tell you how honored I am to have been chosen by someone with your background.  It means more to me than you will even know…” 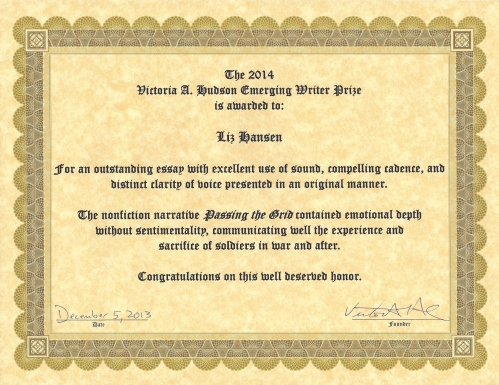 The other finalists also receive a copy of No Red Pen: Writers, Writing Groups & Critique.

All who entered and do not win are welcome to enter again. Just don’t submit the same entry as a preceding year. The judges have long memories.

For the 2015 Emerging Writer Prize, submissions will open on September 1st, 2014 until December 2nd, 2014. The 2015 Prize will be the 8th year of the scholarship! Please help keep the scholarship going with a donation.