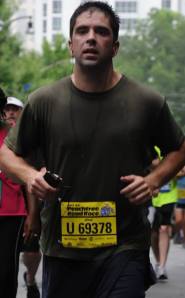 VAH: Jerad, welcome to Three by Five, where emerging writers, authors and other interesting people share a little about their writing, work and lives. First up, please tell us why you write?

JWA:  I write because I have no choice. I don’t mean that in any forced-upon way, I just really feel like I must write. If I don’t, after a day or two I begin to feel unproductive and maybe even a little depressed or otherwise despondent. It’s almost weird… after a heavy writing jaunt I tend to feel a little tired, but really great, much like after a good workout. Aside from that, I write because I like a really good sentence and want to come up with the best I can. There is a positive challenge aspect to writing that gets overlooked a lot, I feel. It’s a personal challenge for me to come up with the best, most honest sentence possible. I think there is something about the creative written word that when done well can really put a hook in you and alter your worldview better than any television show or film or piece of artwork.

VAH: The power of the written word! Sounds like its intrinsic, a force within. What was that first expression of your drive to write? Your first story…?

JWA: My first story was about Joshua Lawrence Chamberlain that I wrote in high school for a history class. Chamberlain was a Maine rhetoric and world religions professor who went off to serve for the Union in the Civil War. All I basically did was write a fictionalized account of his actions at Gettysburg. I’d always play around with paragraphs or short stories that I never finished, but I managed to pull that off on somehow. Though I received an A for the work, I couldn’t tell you if it was good or not… likely not.

VAH: What about literary characters? Do you have a favorite?

JWE: Some of my favorite literary characters include Nick Adams from Hemingway, Raoul Duke (which is more alter-ego than fictional) from Hunter Thompson, Henry Chinaski from the Bukowski novels, Robert E. Lee Prewitt and Milton Warden from From Here To Eternity, Sam Spade from The Maltese Falcon. I’m sure I’m missing a couple hundred here…

VAH: Robert E. Lee Prewitt is a great example of a complex character. He’s one of my favorites and From Here to Eternity is one of my favorite novels (and movies). But if you were stranded on a deserted island, or snowed in at a deserted cabin with no power, what would you want to have with you?

JWE: Easy. I’d take the entire Twilight series and the entire Fifty Shades series. I figure there are at least three, if not four thousand pages of text between those two series. I can use a page or two a day as kindling to start a fire. Between the fire and the hot, nose-thumbing disregard and hatred I have for that brand of cheap, dubious literature I should be kept warm for days on end.

VAH: Well, there you go! A practical choice. Let’s be a little serious now, what was would you say has had the biggest influence on your development as a writer?

JWE: There are a couple of authors who’ve made an impact on my work. James Jones, Norman Mailer, and of course Hemingway are all big players, but I like 60’s and 70’s-era New Journalists as well. Journalists and memoirists like Hunter S. Thompson, Tom Wolfe, Gay Talese, Joan Didion and others really put their hook in me when I was younger. I’m also a big fan of James Ellroy.

VAH: Thanks Jerad! Our readers are invited to return on the 23rd for more and a bonus day post on the 30th.

Jerad W. Alexander is a writer and the associate editor of the upcoming literary journal The Blue Falcon Review, an annual collection of military fiction. His novella, The Life of Ling Ling, was a finalist in the 2012 Serena McDonald Kennedy Prize for Fiction. His essay “On Our Next Stop in Modern War” was a finalist is the Narrative Magazine Spring 2013 Contest. From 1998 to 2006 he served as a U.S. Marine infantryman and combat correspondent, deploying to the Mediterranean, the Horn of Africa, and Iraq. Since leaving the U.S. Marines he has earned a BA in English Literature from American Military University and is pursuing a Masters of Professional Studies in Strategic Public Relations at The George Washington University. He currently lives in Atlanta, Ga. His novella, The Life of Ling Ling, A Novella about Iraq, is available on Amazon.com. He can be found on Twitter and Facebook.

Three by Five – Five questions answered by authors, artists and interesting people published on days that end in three.